“We are together in this battle with our kids; our strength and inspiration, they were the first to undertake the protests. We are against illegal military occupation of Italian soil by the US Navy, against illegal installation of antennas and the health hazard those antennas represent; we are against becoming a primary military target in US conflicts. We fight for life, respect, cooperation, regardless of ideologies and political labels” (“No-MUOS Mothers“, Niscemi, Italy, 8 March 2015).
I am introduced to the No-MUOS movement and its initiators, the “No-MUOS Mothers”, by Daniela and her friends, one Saturday morning in my hometown in Sicily. MUOS stands for Mobile User Objective System, a network of powerful antennas which are being installed around the globe (four stations between US, Europe, Australia and Hawaii) by the US military.

Daniela, one of the activists, explains that the system is going to be operative as a whole by 2017. MUOS European station in Sicily is nearing completion and being tested, although built in a densely populated area: Sicily counts nearly 6 millions inhabitants, which will be continuously exposed to scientifically proven radiation damage. “No-MUOS Mothers” argue that, once completed, this European station will represent a primary military target for US conflicts across the globe, as MUOS system can be used to remotely control drones. Furthermore, MUOS system in Niscemi is being built against all Italian laws, breaking an extremely delicate ecosystem at the heart of a natural reserve, a forest of ancient cork oaks called “La Sughereta“. This place is considered so fragile and precious by Italian laws that visitors are asked to “not displace the sand“:

Andrea, one of the activists, finds such sign while walking to the hilltop, were three giant antennas are being built behind a fence. Theirs are non-violent demonstrations, and the activists can only use their physical presence on site to slow down the works, which are proceeding regardless of the Regional Administrative Court judgement following their legal actions. No-MUOS is a movement spreading across Italy and Sicily which represents eight years of full-time commitment to its initiators. The activists’ demands are about the right to self-determination of a nation, about the human right to live a healthy and peaceful life, and about respect of ecosystems and enforcement of Italian environmental legislation.
At the time of writing, No-MUOS movements of Italy are preparing for a demonstration to be held nationwide on 4th April, 2015. 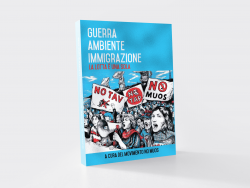